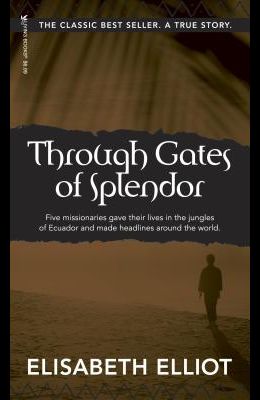 Five men entered the jungle in search of a savage tribe . . . and never returned.

In January 1956, a tragic story flooded headlines around the world. Five men, spurred by a passion to share the good news of Jesus Christ, ventured deep into the jungles of Ecuador. Their goal: to make contact with an isolated tribe whose previous response to the outside world had been to attack all strangers.

At an agreed-upon time, their five young wives sat by their radios, waiting for a message that never came. . . .

Through Gates of Splendor, the story of Nate Saint, Roger Youderian, Ed McCully, Pete Fleming, and Jim Elliot, was first recorded in 1956 by Jim's widow, Elisabeth. Decades later, its story of unconditional love and complete obedience to God still inspires new readers. This edition contains subsequent developments in the lives of the families and the Waodani tribe.

Through Gates of Splendor, Elisabeth Elliot's first book, has become the best-selling and most powerful missionary story of the twentieth century. Elliot has gone on to become a popular speaker and the author of several books and a host of magazine articles.

Read about the continuing story of the Waodani and the missionaries' families: This edition includes two preview chapters from End of the Spear, the new book by Steve Saint (Nate Saint's son), about his return to the jungle and the people who took his father's life. This story is now a major motion picture.

Books like Through Gates of Splendor: 40th Anniversary Edition

0
|   0  reviews
Did you read Through Gates of Splendor: 40th Anniversary Edition? Please provide your feedback and rating to help other readers.
Write Review

List of All Editions of Through Gates of Splendor: 40th Anniversary Edition