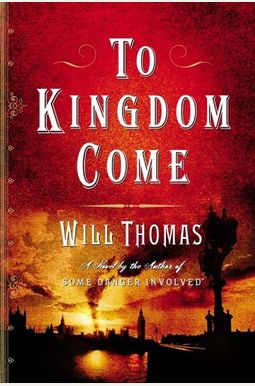 To Kingdom Come: A Novel

Book #2 in the Barker & Llewelyn Series
by
Will Thomas
$6.37
Select Format

Victorian enquiry agent Cyrus Barker and his young assistant Thomas Llewelyn, first introduced in Will Thomas's critically acclaimed debut novel Some Danger Involved, are back with a new mission in To Kingdom Come.

When a bomb destroys the Special Irish Branch of Scotland Yard, all fingers point to the increasingly brazen factions of Irish dissidents seeking liberation from English rule. Volunteering their services to the British government, Barker and Llewelyn set out to infiltrate a secret cell of the Irish Republican Brotherhood known as the Invisibles. Posing as a reclusive German bomb maker and his anarchist apprentice, they are recruited for the group's ultimate plan: to bring London to its knees and end the monarchy forever. Their adventures take them from an abandoned lighthouse on the craggy coast of Wales to the City of Light, where Llewelyn goes undercover with Maire O'Casey, the alluring sister of an Irish radical. Llewelyn again finds himself put to the test by his enigmatic employer as he is schooled in the deadly science of bomb making. Fraught with explosives, secret initiations, and vicious stick fights, and featuring historical figures such as Charles Parnell and W. B. Yeats, To Kingdom Come is a riveting sequel to Some Danger Involved.

Frequently Asked Questions About To Kingdom Come: A Novel

Barker & Llewelyn Series In Order - By Will Thomas

0
|   0  reviews
Did you read To Kingdom Come: A Novel? Please provide your feedback and rating to help other readers.
Write Review

List of All Editions of To Kingdom Come: A Novel