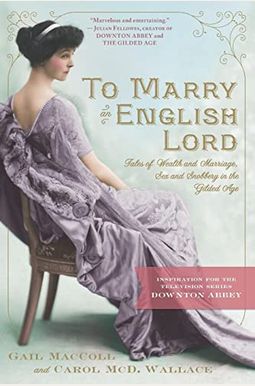 To Marry An English Lord

In 1895 nine American girls, including a Vanderbilt (railroads), LaRoche (pharmaceuticals), Rogers (oil), and Whitney (New York trolleys), married peers of the British realm--among them, a duke, an earl, three barons, and a knight. It was the peak year of a social phenomenon that began in the Gilded Age after the Civil War, and handed down the legacy of Anglomania, preppies, and the world of two television series, Downton Abbey and The Gilded Age. In all, more than 100 American heiresses invaded Britannia and swapped dollars for titles. Filled with a wealth of historical personalities, grand houses, gossipy anecdotes, and a feature called comme il faut--the very finest points of etiquette that ruled Victorian and Edwardian society--To Marry an English Lord is their story.

Frequently Asked Questions About To Marry An English Lord

0
|   0  reviews
Did you read To Marry An English Lord? Please provide your feedback and rating to help other readers.
Write Review

List of All Editions of To Marry An English Lord