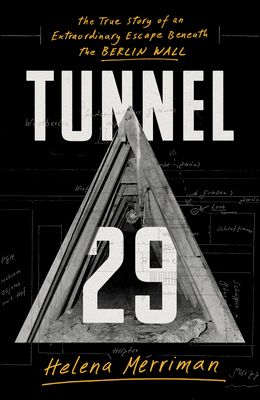 Tunnel 29: The True Story of an Extraordinary Escape Beneath the Berlin Wall

He escaped from one of the world's most brutal regimes.Then, he decided to tunnel back in.

In the summer of 1962, a young student named Joachim Rudolph dug a tunnel under the Berlin Wall. Waiting on the other side in East Berlin were dozens of men, women, and children--all willing to risk everything to escape. From the award-winning creator of the acclaimed BC Radio 4 podcast, Tunnel 29 is the true story of this most remarkable Cold War rescue mission. Drawing on interviews with the survivors and Stasi files, Helena Merriman brilliantly reveals the stranger-than-fiction story of the ingenious group of student-diggers, the glamorous red-haired messenger, the Stasi spy who threatened the whole enterprise, and the love story that became its surprising epilogue. Tunnel 29 was also the first made-for-TV event of its kind; it was funded by NBC, who wanted to film an escape in real time. Their documentary--which was nearly blocked from airing by the Kennedy administration, which wanted to control the media during the Cold War--revolutionized TV journalism. Ultimately, Tunnel 29 is a success story about freedom: the valiant citizens risking everything to win it back, and the larger world rooting for them to triumph.

Frequently Asked Questions About Tunnel 29: The True Story of an Extraordinary Escape Beneath the Berlin Wall

0
|   0  reviews
Did you read Tunnel 29: The True Story of an Extraordinary Escape Beneath the Berlin Wall? Please provide your feedback and rating to help other readers.
Write Review

List of All Editions of Tunnel 29: The True Story of an Extraordinary Escape Beneath the Berlin Wall