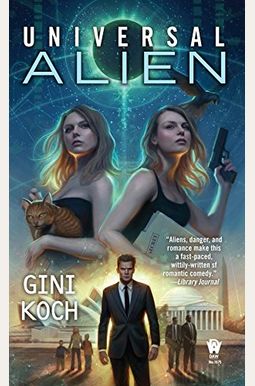 Being the wife of the vice president isn't easy. Especially when your talents lie in kicking butt and rocking out, rather than politics and diplomacy. Jeff and Kitty Katt-Martini find out just how difficult it can be when Kitty accidentally offends the Australian prime minister. Now they have to smooth things over, pronto, or risk creating an international incident the worldwide anti-alien coalitions will be able to use to force Jeff to resign and the A-Cs to leave the planet. Before Kitty can make things even worse, a cosmic congruence and a little help from some powerful beings shoves her into another world--one where she's been married to Charles Reynolds for years and aliens don't exist. She's also landed in the middle of a huge conspiracy and is marked for death.but at least that's business as usual. Kitty's not the only one who's confused, because the Kitty from that world has taken her place in this one. Now Alpha Team and the Diplomatic Corps have to make sure that no one realizes there's been a switch, while preventing World War I from happening. And they have to do it while keeping this new Kitty in line, because she has views about what to do and how to do it, and time is running out. Can each Kitty save the day before it's too late and then go home to her own universe? Or will one Kitty decide to keep the other's life--forever?

0
|   0  reviews
Did you read Universal Alien (Alien Novels)? Please provide your feedback and rating to help other readers.
Write Review

List of All Editions of Universal Alien (Alien Novels)