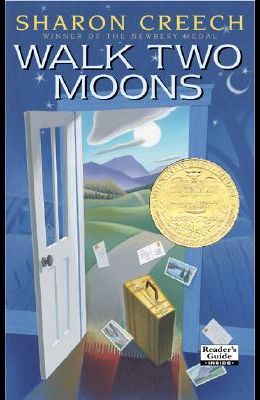 Gramps says that I am a country girl at heart, and that is true.

Thirteen-year-old Salamanca Tree Hiddle, proud of her country roots and the Indian-ness in her blood, travels from Ohio to Idaho with her eccentric grandparents. Along the way, she tells them of the story of Phoebe Winterbottom, who received mysterious messages, who met a potential lunatic, and whose mother disappeared.

Beneath Phoebe's stories Salamanca's own story and that of her mother, who left on April morning for Idaho, promising to return before the tulips bloomed. Sal's mother has not, however, returned, and the trip to Idaho takes on a growing urgency as Salamanca hopes to get to Idaho in time for her mother's birthday and bring her back, despite her father's warning that she is fishing in the air.

This richly layered novel is in turn funny, mysterious, and touching. Sharon Creech's original voice tells a story like no other, one that readers will not soon forget.

0
|   0  reviews
Did you read Walk Two Moons? Please provide your feedback and rating to help other readers.
Write Review