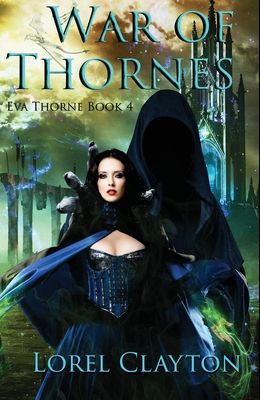 Her destiny is to face the god of death, but her choice will decide everyone's fate.

Eva Thorne, the relentless femme fatale turned private eye, has fought werewolves, vampires and necromancers, but her greatest test lies ahead. Hunted by the lich queen who wants to sacrifice her soul to end the world, Eva seeks answers. Is she the key to defeating the Dead God? The lives of everyone she has ever cared about are at stake, and she cannot afford to shy from gazing into the dark heart of the Thorne legacy. What she finds is an unexpected enemy. Power, temptation, and secrets whispered in dark places await her, and it would be far easier to rule over the souls of the living and the dead rather than save them. Can she avoid her fate, or is she doomed to become that which she hates the most?

In this finale to the Eva Thorne Series, war rages across the Kingdoms. The civil war orchestrated by necromancers in service of the Dead God will tear the last refuge of humanity apart, sending everyone to dwell in the Lands of the Dead, unless Eva can stop it. When her people summoned the Dead God into the world, she was the sacrifice meant to seal the bargain. She's avoided that fate for over twenty years, but her enemies have hunted her to the end of the world. Now, there is no choice but to stand and fight. Only, she no longer knows who the real enemy is.

0
|   0  reviews
Did you read War of Thornes? Please provide your feedback and rating to help other readers.
Write Review