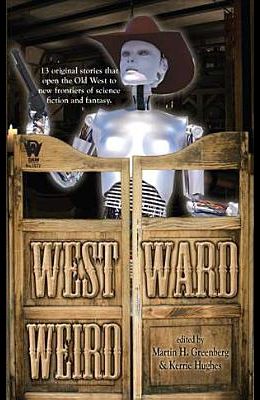 When you were a kid, did you long to put on your cowboy boots, belt on your guns, saddle up, and ride off to find adventures? Did you sit glued to the TV watching The Lone Ranger, Maverick, Bonanza, The Wild Wild West, The Adventures of Brsico County Jr., and Firefly? And were you caught up in movies like Outlands, Time Bandits, Serenity, or Back to the Future Part I?

If so, Westward Weird is the book for you. Thirteen original stories included here ride a very broad range between science fiction, fantasy, and the paranormal--and all of them are told from a Wild West perspective.


Get ready for some good old-fashioned adventure, as:
-The Old Gods cross paths in the Old West.
-Two theives are given a job they can't refuse, but no one told them there'd be aliens.
-A mining family never expected their claim to be jumped from parallel universes.
-A Mars colony may be about to find out exactly how the West was won.
-Cowboys will be hard-pressed to ride the herd on the living dead.

0
|   0  reviews
Did you read Westward Weird? Please provide your feedback and rating to help other readers.
Write Review