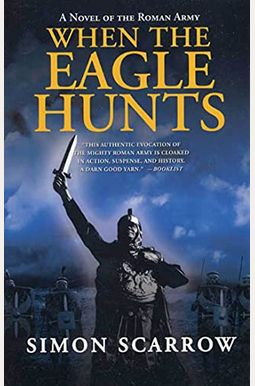 When The Eagle Hunts: A Novel Of The Roman Army (Eagle Series)

This authentic evocation of the mighty Roman army is cloaked in action, suspense, and history. A darn good yarn.---Booklist

Is the unflinching courage of the Roman army a match for the ruthless barbarity of the British tribes? In the bitter winter of a.d. 44, the Roman troops in Britain are impatiently awaiting the arrival of spring so that the campaign to conquer the island can be renewed. But the native Britons are growing more cunning in their resistance, constantly snapping at the heels of the mighty Roman forces. When the most brutal of the native tribesmen, the Druids of the Dark Moon, capture the shipwrecked wife and children of General Plautius, quick action is called for. Two volunteers from the crack Second Legion must venture deep into hostile territory in a desperate attempt to rescue the prisoners. Centurion Macro and his optio, Cato, find themselves slipping out of camp in the dead of night to reach the General's family before they are sacrificed to the Druids' dark gods. They know they are heading towards an almost certain death, and their only hope is that, with sheer courage and ingenuity, they can outwit the most ruthless foes they've ever faced. Praise for When the Eagle Hunts
His settings are well described and the plotting is strong, with much of the action reminiscent of Bernard Cornwell's.---Publishers Weekly An account of war and religious fanaticism with plenty of spice.---Kirkus Reviews The third in Scarrow's historical series.and it's probably the best.---The Mail on Sunday (UK)

Frequently Asked Questions About When The Eagle Hunts: A Novel Of The Roman Army (Eagle Series)

0
|   0  reviews
Did you read When The Eagle Hunts: A Novel Of The Roman Army (Eagle Series)? Please provide your feedback and rating to help other readers.
Write Review

List of All Editions of When The Eagle Hunts: A Novel Of The Roman Army (Eagle Series)