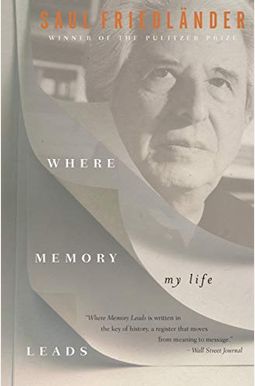 Where Memory Leads: My Life

In this sequel to the classic work of Holocaust literature When Memory Comes, a Pulitzer Prize-winning historian returns to memoir to recount this tale of intellectual coming-of-age on three continents.

Forty years after his acclaimed, poignant first memoir, Friedl nder returns with Where Memory Leads: My Life, bridging the gap between the ordeals of his childhood and his present-day towering reputation in the field of Holocaust studies. After abandoning his youthful conversion to Catholicism, he rediscovers his Jewish roots as a teenager and builds a new life in Israeli politics. Friedl nder's initial loyalty to Israel turns into a lifelong fascination with Jewish life and history. He struggles to process the ubiquitous effects of European anti-Semitism while searching for a more measured approach to the Zionism that surrounds him. Friedl nder goes on to spend his adulthood shuttling between Israel, Europe, and the United States, armed with his talent for language and an expansive intellect. His prestige inevitably throws him up against other intellectual heavyweights. In his early years in Israel, he rubs shoulders with the architects of the fledgling state and brilliant minds such as Gershom Sholem and Carlo Ginzburg, among others. Most important, this memoir led Friedl nder to reflect on the wrenching events that lead him to devote sixteen years of his life to writing his Pulitzer Prize-winning masterpiece, The Years of Extermination: Nazi Germany and the Jews, 1939-1945.

Frequently Asked Questions About Where Memory Leads: My Life

0
|   0  reviews
Did you read Where Memory Leads: My Life? Please provide your feedback and rating to help other readers.
Write Review

List of All Editions of Where Memory Leads: My Life