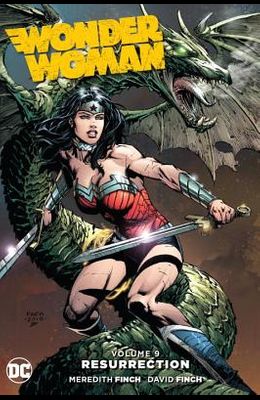 She's the God of War, but Diana of Themyscira--a.k.a. Wonder Woman--is about to discover an enemy deadlier than any she's ever encountered. An illness has been unleashed that could destroy every Olympian left alive, and it's starting with the most vulnerable demigod of them all: baby Zeke, the infant reincarnation of Zeus--and the person Diana cares about above all else.

To save the child and protect her immortal kin, Wonder Woman must begin a perilous quest. Old allies and enemies alike will return--but will they help or hinder her? Her home on Paradise Island awaits--but will her homecoming plunge her into hell itself? And shocking revelations are coming--will they cause the Amazon warrior to question everything she thought she knew about her family, her friends.and even herself? Find out in WONDER WOMAN VOL. 9: RESURECTION, from the creative team of Meredith Finch (Tales From Oz) and David Finch (BATMAN: THE DARK KNIGHT), with the help from other talented artists including Miguel Mendon a (TEN TITANS), Scott Hanna (GREN LANTERN CORPS) and more Collecting issues #48-52 of the acclaimed series, this stunning chapter in the Wonder Woman saga features surprises that will raise the dead This volume also includes a special preview of WONDER WOMAN: REBIRTH #1

0
|   0  reviews
Did you read Wonder Woman Volume Resurrection? Please provide your feedback and rating to help other readers.
Write Review

List of All Editions of Wonder Woman Volume Resurrection