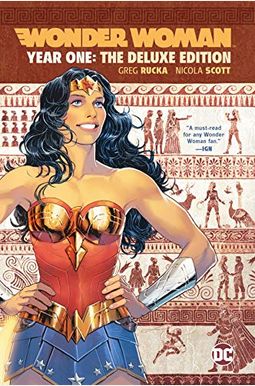 Paradise Island has been breached, Ares stirs, and the Amazons must answer with a champion of their own.one who is willing to sacrifice her home amongst her sisters to save a world she has never seen. Wonder Woman's journey begins in this epic origin story

Before she was Wonder Woman, Diana of Themyscira was the princess of the Amazons. She and her sisters were warriors, but their island home was peaceful--until Man's World breached their paradise for the first time. A crashed American pilot brings with him a tale of war. If Ares is once again walking free in the world of men, only the Amazons can stop him. As the god of war stirs to power, Diana must sacrifice everything to become the champion of a world she has never seen. In this perfect jumping-on point for the DC Universe, legendary writer Greg Rucka (Detective Comics) and artist Nicola Scott (Superman) unite to tell the shocking, definitive origin of the Amazon Princess. Collects Wonder Woman #2, #4, #6, #8, #10, #12, #14, and stories from Wonder Woman Annual #1.

0
|   0  reviews
Did you read Wonder Woman: Year One Deluxe Edition? Please provide your feedback and rating to help other readers.
Write Review

List of All Editions of Wonder Woman: Year One Deluxe Edition