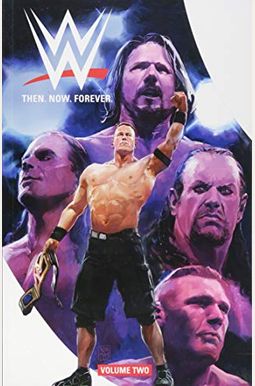 Book #2 in the WWE: Then. Now. Forever. Series
by
Dennis Hopeless and Box Brown and Aj Styles
$16.99
Select Format

This anthology contains a wealth of new content, celebrating the versatility and diversity of WE throughout its various eras.

Go further than what you get to see on TV and WE Network. WE: Then. Now. Forever. Vol. 2 is the next stage in the smash anthology series taking fans through the greatest moments of Sports Entertainment history. From moments of pure power in Survivor Series to ridiculous Royal Rumble brawls, the biggest and best moments are brought together here, showcasing fan-favorite superstars Bret Hart, Shawn Michaels, The Undertaker, Macho Man Randy Savage, Goldberg, Brock Lesnar, The Shield, and more Featuring an all-star roster of writers and artists including Dennis Hopeless, Box Brown, Ryan Ferrier, Kendall Goode, Lucas Werneck, Rodrigo Lorenzo, Daniel Bayliss, and a special story co-written by WE Superstar AJ Styles, this anthology takes it beyond the ring and celebrates the rich history of WE.

WWE: Then. Now. Forever. Series In Order - By Dennis Hopeless

0
|   0  reviews
Did you read Wwe: Then Now Forever Vol. 2? Please provide your feedback and rating to help other readers.
Write Review

List of All Editions of Wwe: Then Now Forever Vol. 2