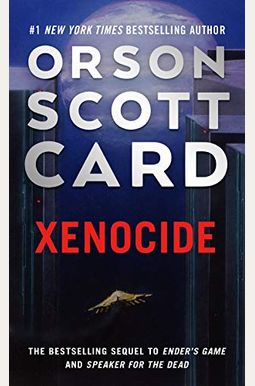 With over 20 million copies sold and translated into more than 34 languages, Orson Scott Card's Ender Saga is one of Tor's all-time bestselling series. Xenocide is now repackaged for a new generation of readers.

The war for survival of the planet Lusitania will be fought in the heart of a child named Gloriously Bright. On Lusitania, Ender found a world where humans and pequininos and the Hive Queen could all live together; where three very different intelligent species could find common ground at last. Or so he thought. Lusitania also harbors the descolada, a virus that kills all humans it infects, but which the pequininos require in order to become adults. The Startways Congress so fears the effects of the descolada, should it escape from Lusitania, that they have ordered the destruction of the entire planet, and all who live there. The Fleet is on its way, a second xenocide seems inevitable. Xenocide is the third novel in Orson Scott Card's The Ender Saga. THE ENDER UNIVERSE Ender series Ender's Game / Ender in Exile / Speaker for the Dead / Xenocide / Children of the Mind Ender's Shadow series Ender's Shadow / Shadow of the Hegemon / Shadow Puppets / Shadow of the Giant / Shadows in Flight Children of the Fleet The First Formic War (with Aaron Johnston) Earth Unaware / Earth Afire / Earth Awakens The Second Formic War (with Aaron Johnston) The Swarm /The Hive Ender novellas A War of Gifts / First Meetings

0
|   0  reviews
Did you read Xenocide: Volume Three of the Ender Saga? Please provide your feedback and rating to help other readers.
Write Review

List of All Editions of Xenocide: Volume Three of the Ender Saga