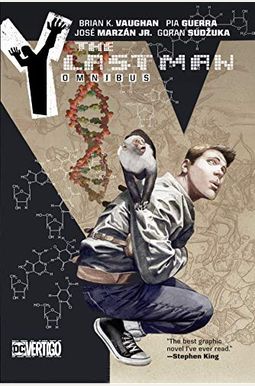 WINER OF THRE EISNER AWARDS. A WORLD WITHOUT MEN. In 2002, the world changes forever. Every man, every boy, every mammal with a Y chromosome everywhere on Earth suddenly collapses and dies. With the loss of nearly half the planet's population, the gears of society grind to a halt, and a world of women are left to pick up the pieces and try to keep civilization from collapsing entirely. The gendercide, however, is not absolutely complete. For some unknown reason, one young man named Yorick Brown and his pet male monkey, Ampersand, are spared. Overnight, this anonymous twentysomething becomes the most important person on the planet--the key, it is hoped, to unlocking the secret of the mysterious sex-specific plague. For Yorick himself, the most important person on the planet is 10,000 miles away--and he will stop at nothing to find her. In setting off across the post-male landscape, however, man and monkey are about to learn just how valuable they are--both as a prize and as a target. Collected for the first time in a single, comprehensive omnibus, writer Brian K. Vaughan and artist Pia Guerra's Eisner Award-winning Vertigo series Y: The Last Man brings to vivid life the age-old speculation: What would really happen to the last man on Earth? Collects Y: The Last Man #1-60 and a sketchbook featuring behind-the-scenes art by Pia Guerra.

5
|   8  reviews
Did you read Y: The Last Man Omnibus? Please provide your feedback and rating to help other readers.
Write Review
1

List of All Editions of Y: The Last Man Omnibus